On September 30, 2014- Joelle Lurie released her long-awaited debut album “Take Me There” with The Pinehurst Trio which made it into the Top 10 jazz albums on iTunes in its first week. The previous night, she played a sold out release concert held at Subculture in New York City. In the tradition of first albums, it does a fine job of introducing this artist to the masses. This is straight up innovative jazz infused with a touch of pop with a shot of hip hop and soul and the tiniest bit of musical theatre. The tracks take us everywhere from stellar originals to impressive takes on standards to re-imagined Sondheim to trippy 70s and 80s hits. All of the brilliant, inventive arrangements are by bassist Ben Gallina and they are truly a part what make this album a stand out. I’m sitting here on a rainy New York City afternoon with my cup o’ joe, and I can’t help but think that “Take Me There” is the perfect pairing for my breakfast party of one. Speaking of coffee, Starbucks needs to throw those Gaga/Bennett cds in the garbage and start playing this album immediately……… ok, fine, don’t throw them in the garbage, but do re-locate them to the back storage room for now and then play this album immediately.

Buy “Take Me There” on iTunes HERE!

#1. “All or Nothing At All”– recorded by many greats such as Frank Sinatra, Diana Krall and Sarah Vaughn making it a true jazz standard. From the first downbeat you can tell this woman means business with her album opener. The vocal interpretation of the story arc is what I find so brilliantly crafted. The song begins as though she is slowly waking from a heartsick dream, moving ever so gracefully into convincing herself that she will stick with this mantra – to have all of him or nothing at all. It eventually builds to a full, solid realization of her standards, complete with a driving jazz break, and ending with an almost happy, content, and grown ass woman clarity. #flawless

#2. “Head Over Heels”– a true 80s hit by Tears For Fears. This is a completely new and eccentric take on that song-you-think-you-know-oh-yep-yeah-it’s-that-one. It’s barely recognizable, but that’s what makes covers fun, right?

#3. “Should We?” by Jahn Sood & Zayre Ferrer. This album highlight features duet partner & pianist Matt Kanelos. This song may sound familiar to you- as it should most definitely be featured on an indie movie soundtrack starring Michael Cera or Ellen Page or during a montage on Parenthood when one of the kids falls in love at college or something. One of my favorites on the album- adorable, simple, well written, and catchy. 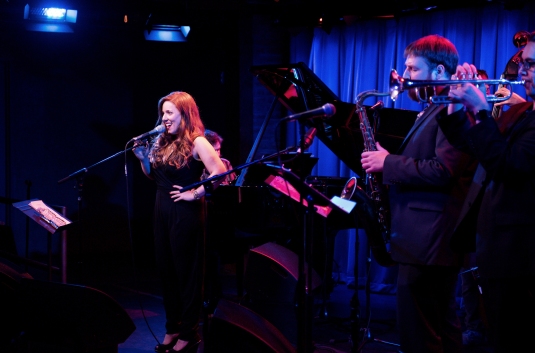 #4. “Take Me There” by Robert Mezzanotte. Backup vocals by Matt Kanelos. Ok, two songs in a row that I just can’t get over. I can’t help but draw similarities between this song and a Bonnie Raitt ballad- which is basically the best kind of ballad. All other ballads are garbage and pale in comparison. Except this one. This one is the title track and so it should be. It’s gorgeous and has an ever so slight country sentimentality both in lyric and melody.

#5. “Just What I Needed” by The Cars. And speaking of cars, this should be the first song on your Ultimate Roadtrip Playlist. Not a whole lot of extra bells and whistles on this cover- smooth, clean, delightful- the perfect driving song as well as the most legit pop song on the album. Also, I’m a sucker for not only Ric Ocasek, but horns and saxophones which provide the best punches.

#6. “What We Have Is Better” by Joelle Lurie, Ben Gallina, and Anna Marquardt. What would happen if Carrie Bradshaw and Stevie Wonder got together to write a song? This. This would happen. This funky throwback is an internal monologue that relishes in the song breaks and intentional beats. I had this song on as I was doing the dishes and almost broke a wine glass whilst using it as a microphone. So… chose your mics wisely. Or just don’t do dishes.

#7. “Hares On The Mountain” – this 17th century secular folk song is one of the most surprising songs on the album. This haunting track really lets us sit back and dwell in Joelle’s effortlessly buttery vocals. There is also a delicious clarinet break that is one of my favorite things that happens on “Take Me There.”

#8. “Somewhere” from “West Side Story” written by Leonard Bernstein and Stephen Sondheim truly showcases the jazz professional that Joelle Lurie is more than any other track on the album. What a gloriously rolling interpretation of one of the most iconic songs in history. We all know “Somewhere” in its many reincarnations, but I guarantee you have never heard it like this. Invoking birds taking flight on a beautiful spring morning, I give this rendition a standing ovation.

#9 “Almost Like Being in Love” is that swinging jazz standard that would start playing during the credits of a Diane Keaton/Steve Martin movie. Sorry, I know… I have a “hypothetical soundtrack” problem. I write what I know. I need to take this moment to give a shout out to the tight tight tight horn section! This track will make you take to the nearest hill and twirl ’round and ’round with a big dumb smile on your face. And hopefully that hill is somewhere legendary like Central Park. And hopefully no one gives you shit for livin yo life.

#10. “Three States Away” is a beautiful original piece with music by Ben Gallina and Joelle Lurie with lyrics from a poem by Craig Crist-Evans entitled “What the Heart Thinks.” Joelle’s technique on this particular ballad is matched only by her vulnerability and carefulness with the text. One can only imagine this song is a deeply personal one.

#11. “The Man I Love” by George and Ira Gershwin is the pièce de résistance of “Take Me There.” You know, the one with mad scatting, singing from the toes, rasp, and all the goodies. Joelle and The Pinehurst Trio are definitely bringing sexy back with this soulful homage to the first brothers of pop standards. I must also note that while not a Christmas song, listening to this version made me desperately crave a Christmas album from Joelle. Hang the mistletoe and make out with that microphone honey!

#12. “Detour Ahead” – Ella, Dianne, Billie, Jane, all the jazz greats have had their go of this iconic standard. This rich rendition is the perfect closer to an album full of the many colors of love. Get me a dirty vodka martini, Smitty. Joelle Lurie just took me there.

Joelle Lurie has been a long time student of music, studying jazz and classical voice at New England Conservatory of Music as well as Boston University’s Tanglewood Institute. She also studied opera at Indiana University School of Music, The Opera Festival of Lucca and Boston University. Having graduated to master of the medium long ago, this album has been long-awaited in the northeastern jazz circuit. Ever since 2005, Joelle has been gigging non-stop at venues such as The Boom Boom Room at the Standard Hotel, Rockwood Music Hall, Cornelia Street Cafe, Zinc Bar, The Metropolitan Room, James Beard Foundation’s Silver Anniversary Gala, Fashion Week-Henri Bendel, as well as a million weddings in the tri-state area. You know that old chestnut, trying to live the artist life while trying to make rent? She eventually found herself going the more corporate route at the very chic Harry’s (which she loves!) but never lost sight of her passion for music. What’s even more impressive is the focus it took to start a new career while fully realizing her first one. It might seem a clichéd New Yorker story, but rarely do people come out the other side having done everything they set out to do with such success in both areas. I couldn’t be prouder and this album is everything her family, friends, local baristas and fans wanted it to be.

“SHOULD WE?” performed at SubCulture in NY

Recorded at The​ ​Bunker Studio in ​​Brooklyn, NY

Photography​ ​and Design​ ​by​ ​Lindsey Theong